From Teacher | AdvisorChuck Reyes: "One of my students, Genesis, highlighted this page that she brought in for me to see."

1.06.21 Mixer: Mixing Demonstration with Chad Shank – MAS Education Director, Chad Shank, demonstrates how to use essential tools in your DAW that you can use to mix professional sounding recordings. Chad uses Logic Pro X to mix a song by MAS member, Paula Wilson.

Songwriting Struggles and How to Get Past Them, a songwriting workshop by Chad Shank, 12/10/2020

Berklee College of Music songwriting professor Pat Pattison (a Minnesota native) has presented numerous songwriting workshops to MAS members since the mid-1990s. The notes provided here were taken by MAS member Tim Zbikowski at a workshop with professor Pattison in October of 2008.

This "paper" exercise shows you how to use the structure of an existing song to help you create an entirely different song of your own.

This one-page document provides a set of tips that will help you prepare for a successful performance at an MAS showcase or any other live appearance.

This is a brief discussion of elements that might be found in most successful songs.

Elements of a Song

Here is a 31-page document about the Business of Music from Berkleemusic.com. Berkleemusic is "the award-winning online extension school of Berklee College of Music, the world's premier institution for the study of contemporary music for over 65 years. Berklee's faculty and alumni have won over 150 Grammy Awards and sold over 400 million records."

The document contains information on the following topics:

Listen to a 16-minute radio conversation in 2012 between MAS President Wayne Hamilton and radio DJ Carl Unbehaun, whose weekly Minnesota Homebrew show focuses on original music from Minnesota songwriters. The segment also outlines the benefits of MAS membership for both new and experienced songwriters.

Songwriting articles by James Linderman
James Linderman teaches guitar, piano and music theory and coaches songwriting, in studio and over Skype to students from all over the world from Newmarket, Ontario, Canada. He is a member of an international, off campus, academic advisory board for The Berklee College of Music in Boston known as Berkleemusic Ambassadors and is Berklee’s Worship Music Advisor.

James has had 4 top 10 singles on Canadian Christian radio and songs published in Nashville. He is a guest presenter at music conferences all over Canada and writes songwriting articles for music magazines all over the world. James has a Canadian University (York) and American College (EOSC) education in music theory, composition, and journalism. 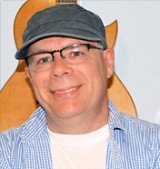 A Good Kind of Stress

Fingerboard Management for the Modern Guitarist